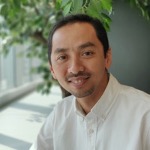 Before he become the successful person that he is now, he received his undergraduate degree from Faculty of Public Health, Universitas Indonesia on 1994 where he majored in Public Health. After getting his Bachelor of Science degree, he continues his study at University of York where he received his Graduate Certificate in Economics and Master of Science degree in Health Economics. On 2009, he received a Postgraduate Certificate in Education which is a higher education course in England, Wales and Northern Ireland that provides training in order to allow graduates to become teachers within maintained schools.

As a Senior Lecturer at University of Derby, United Kingdom, his teaching area covered subjects in Epidemiology, Statistics, Research Methods and Health Economics. He has been a Senior Lecturer for more than two years starting from February 2019. On 2015, he published a scientific article called “Telephone Consultation as a Substitute for Routine Out-patient Face-to-face Consultation for Children with Inflammatory Bowel Disease: Randomised Controlled Trial and Economic Evaluation” along with his colleagues and the article was then published by EBioMedicine.